Scroll Down For Arabic Version

“We need to bear with each other,” Prime Minister Najib Mikati declared boldly earlier this month, asking the Lebanese people to steel themselves against the country’s cascading crises. In doing so, Mikati became just the latest politician to count on widespread “resilience” – the shopworn explanation for how the Lebanese people endure their nation’s seemingly interminable disasters.

Indeed, it seems that the long-suffering Lebanese are now approaching their threshold of “resilience”. As mental health problems spike due to the economic crisis, the Beirut Port explosion, and the COVID-19 pandemic – to name but a few – psychiatrists and psychologists are leaving Lebanon in record numbers. Those mental health professionals who remain have reduced prices, but still most sufferers cannot afford to receive treatment.

“The coping mechanisms or strategies that people used to […] mitigate the tensions and the crisis are no longer available,” said dramatherapist Christelle Madani. “This translates to negative coping mechanisms.” Left unaddressed, Lebanon could slip over the precipice into widespread substance abuse, angst, and even violence.

Since October 2019, when Lebanon’s economic crisis began in earnest, the country’s mental health professionals have been leaving en masse. A recent survey by the Lebanese Psychiatric Society found that 16% of Lebanese psychiatrists had recently emigrated. To make matters worse, an additional 23% were planning to leave, and a further 27.9% are considering the move.

Most respondents nominated better economic opportunities as their key motivation for leaving Lebanon. A source indicated that psychiatrists and psychologists have been forced to reduce their rates in response to the Lebanese Lira’s dramatic devaluation. Before 2019, psychologists tended to charge $40 to $100 per session; now each appointment costs around $30, or the equivalent in Lebanese Lira at the parallel market rate.

In these volatile conditions, nobody wins. Psychiatrists and psychologists receive far less compensation for their services, while their patients struggle to pay for treatment. Even at the lower prices, one session would cost the monthly salary of a minimum wage earner. Virtually no Lebanese enjoy insurance cover for mental health treatments, given that even pricey private insurance policies exclude such services.

The lack of access to mental health professionals – a trend that is growing incrementally worse – places Lebanon in an extremely precarious position. In Finland, the government declared a “shortage” of mental health workers upon finding that the country had only 23.6 psychiatrists and 109.5 psychologists for every 100,000 people. The Finnish problem pales in comparison with mental health woes in Lebanon, where the same number of residents can rely on just about 1.2 psychiatrists and 11.3 psychologists – and only if they can afford the fees.

“Demand is increasing for mental health services,” said Dr Rayan Aziz, a Lebanese psychologist. “But the offer is decreasing with (many) psychologists leaving Lebanon to work (elsewhere).” 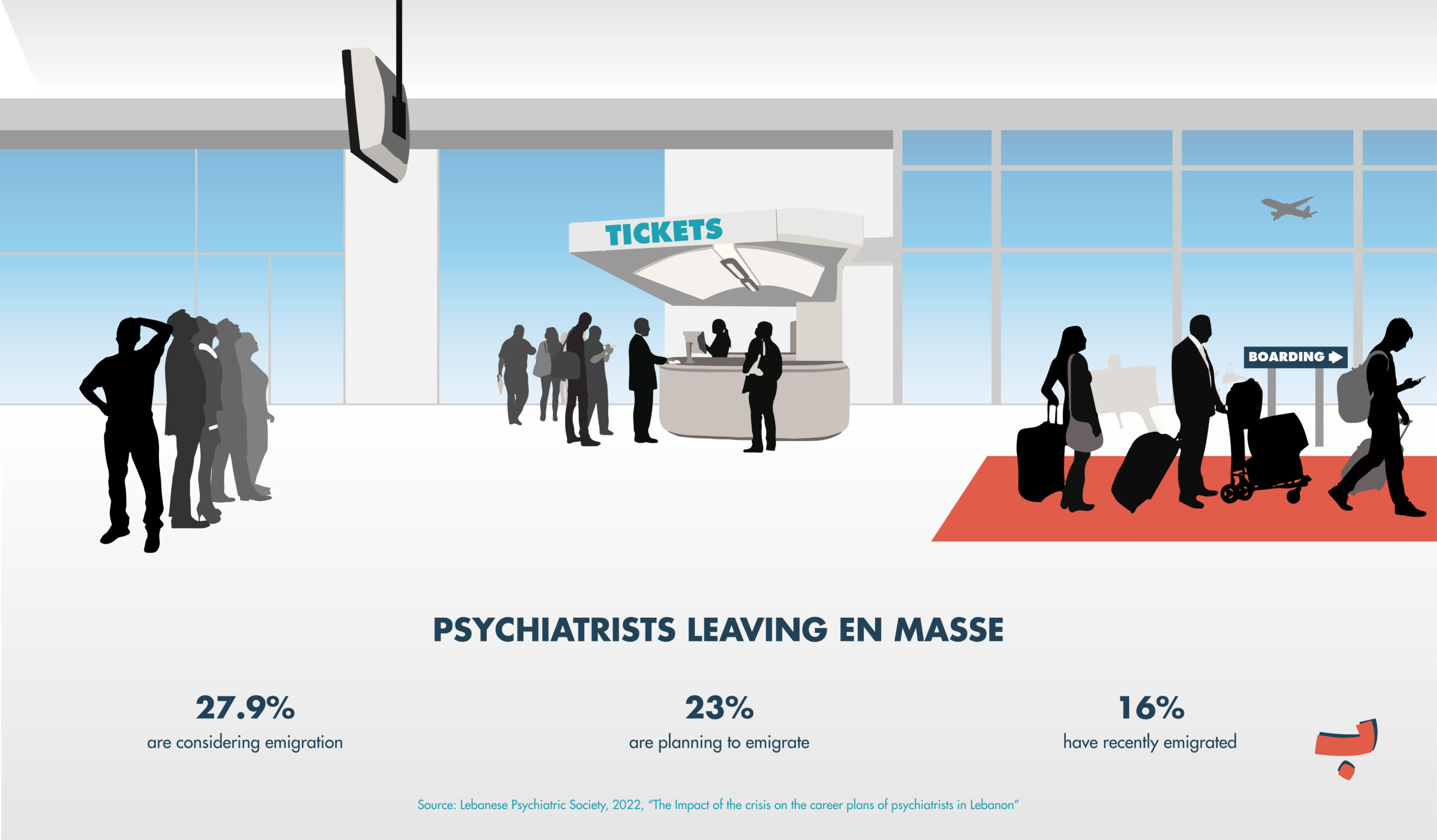 The professional caregiver exodus could scarcely have come at a worse time, even in Lebanon’s tumultuous modern history.

“Of course, a lot of people are suffering tremendously from the political and economic situation,” said Aziz. “You feel like people are already at their last straw.”

While the government fails to provide comprehensive data on mental health, recent statistics from several NGOs underscore the gravity of Lebanon’s current predicament. Lebanese organization Embrace, which operates the national emotional support and suicide hotline, reported a 275% increase in callers since 2019, when the economic crisis began in earnest. Alarmingly, deteriorating conditions have weighed heavily on young Lebanese – about 60% of Embrace’s callers are aged 35 or below.

According to Embrace, the Beirut Port explosion only compounded mental health issues. Soon after the blast, a survey of Beirut residents found that 83% of respondents felt sad almost every day, 78% felt anxious or worried, and 84% felt sensitive to loud noises and dangers.

And now, with access to mental health services evaporating, victims have turned to negative coping strategies. Skoun, a local NGO that runs a free addiction rehabilitation center, has recorded a strong increase in demand in recent years. In 2019, Skoun admitted about 450 people for addiction; this figure had jumped by 33% by the end of 2021. Skoun expects these numbers to increase in 2022, as the organization has already extended the current waiting list for treatment.

The government cannot blame Lebanon’s mental health catastrophe on bad luck. Rather, the sector has been mismanaged for decades, leaving vital services hopelessly exposed to the country’s unprecedented economic crisis.

Before October 2019, the Ministry of Public Health (MOPH) assigned a pittance of its budgetary allowance to mental health services. Today, mental health allocations account for around 1% of MOPH’s overall budget – well below half of the global median spend, which is 2.4% of government health finances.

The government’s low prioritisation of mental health care stands at odds with Lebanon’s tortured history. The population still struggles with intergenerational trauma arising from the civil war (1975-1990), the emotional scars of which persist for both survivors and their descendants. Since then, post-war generations have suffered their own series of traumatic episodes, including the 2006 war, the country’s ongoing economic crisis, and the Beirut Port explosion.

Even in these current times of deprivation, the state has some options to arrest the country’s slide into a mental health disaster. First, MOPH should commission a nationwide assessment of mental health, given that the latest comprehensive study dates back more than ten years.

This essential step would help the government to identify needs and craft responsive policies accordingly. One such initiative would almost certainly be a mental health awareness drive, which could counteract social taboos against seeking help for mental health challenges.

The government must also consider immediate ways to broaden public access to mental health services. MOPH could partner with international partners to provide funding to mental health professionals – including psychiatrists, psychologists, and psycho-social support workers – to offer financial incentives to remain in Lebanon. In parallel, programs should explore the potential of online counselling services, allowing the Lebanese diaspora and other service providers abroad to help.

What will not suffice is for the nation’s political elites – the source for so many enormous obstacles plaguing Lebanon – to continue storing their faith in Lebanese “resilience.” This stoicism in the face of adversity – which the psychologist Aziz diagnoses as “learned helplessness” – does not offer a long-term solution to Lebanon’s mental health collapse.

“Overall, resilience is a double-edged sword,” Aziz explained. “It helps you survive and adapt, but […] it sometimes makes you accept things [for example, from the government] that you would not accept in different circumstances.”

[i] Lebanese Psychiatric Society, 2022, “The Impact of the crisis on the career plans of psychiatrists in Lebanon”.