The First 100 Days: A Plan of Action for Lebanon’s Opposition MP’s First Months in OfficeEditorial

As a minority, opposition MPs must take a strategic approach to cement their legitimacy and start to make real change in the country.

On Tuesday the newly elected Parliament will be put to the test for the first time to elect a Speaker of Parliament, Deputy Speaker, and secretariate. With the unprecedented election of 13 MPs from outside Lebanon’s body politic, there is a glimmer of hope that this time could be different—that is if the opposition starts off with a pragmatic and serious approach to its newfound position of (marginal) power.

Ιn a Parliament of 128 seats, 13 MPs who have yet to form a formal coalition do not represent a majority. On the contrary, the traditional political parties continue to set the rules. Yet, the tiny minority could still have some sway. Under Articles 19 and 77 of the Lebanese Constitution 10 is the magic number: a block of 10 MPs has the right to contest the constitutionality of laws and propose revisions to the constitution. What’s more, if opposition MPs manage to consolidate their power and stand as one, they may end up punching well above their weight in a highly polarized Parliament. 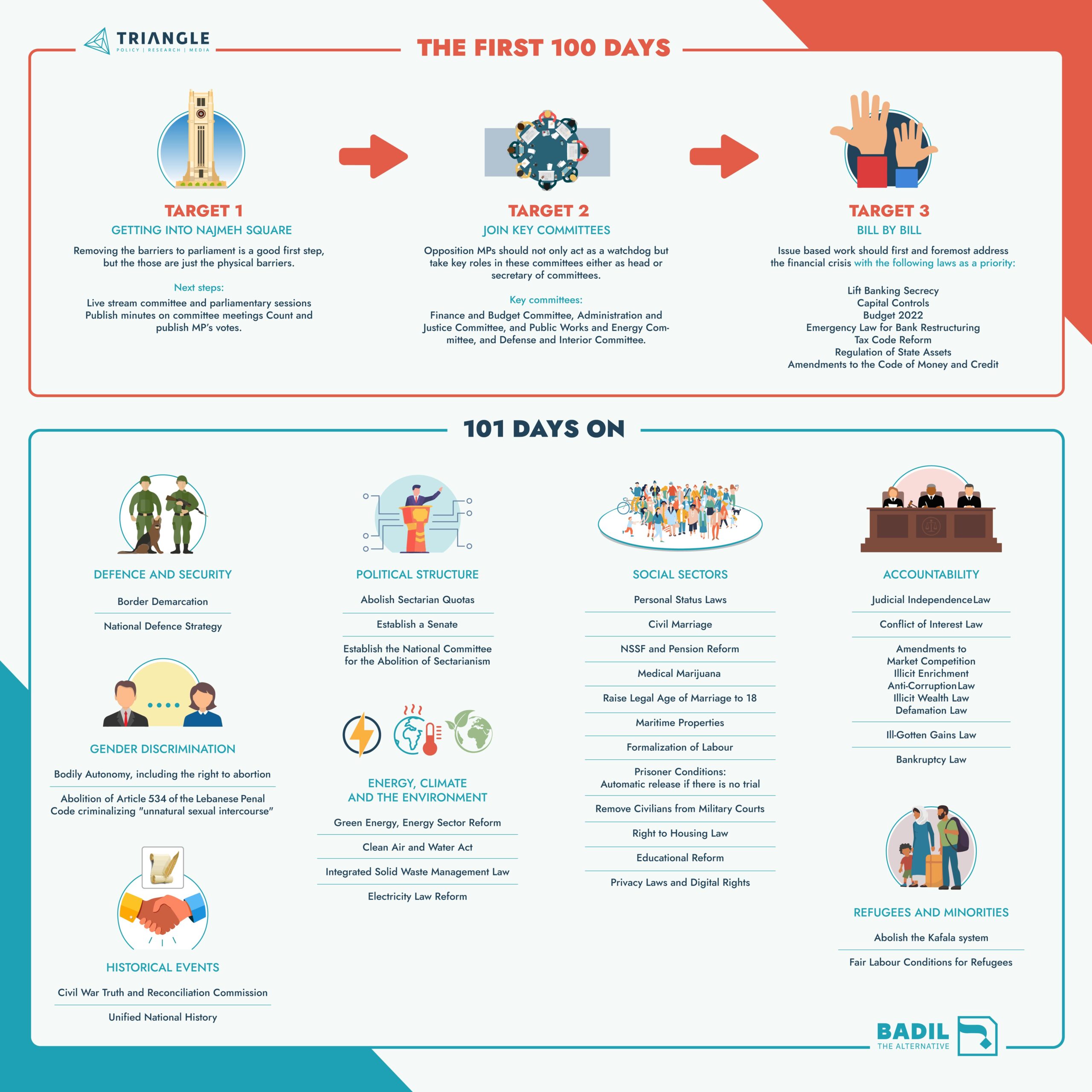 If the election result proved anything, it was that the 2019 popular uprising has not been forgotten. That being the case, the uprising’s main demands should form the core guiding principles for opposition MPs going forward namely: accountability, socio-economic justice, and a break with the past.

Accountability plays a role on multiple levels. Accountability for the theft of bank deposits, for the August 4 port explosion, for squandering public funds, for ill-gotten gains, and for crimes committed in the Civil War, to name but a few.

The demand for social and economic justice is equally important. Opposition MPs should stand firm against the politico-banking elite that has held the country in its suffocating grip for way to long, preventing ordinary citizens from making any tangible progress in their lives

Finally, there is the legacy of the Civil War. This dark chapter in Lebanon’s history remains the elephant in the room, as warlords-turned-politicians continue to rule the country. Despite the 1991 Amnesty Law, there needs to be at least recognition of the crimes committed during this period. For without recognition there cannot be reconciliation.

Facing an uphill battle, opposition MPs cannot rely solely on tactics, they a need strategy that shows they can stand by their guiding principles and represent a real opposition while not seen as obstructionists. That strategy needs to be based on four pillars: issue-based work, non-partisanship, substantive opposition, and strategic alliances.

The Lebanese have been through too much stalemate, and the current makeup of the Parliament means no one party or alliance yet has a clear majority. In such conditions, the opposition cannot be seen as obstructive. Instead, they need to show a willingness to work on any issue, with any party—and that willingness will make the opposition stand out to gain credibility.

Issue-based work makes policy making more important and signals that opposition MPs are not just an obstructive force, but will take a pragmatic approach to reviewing, debating, and passing just laws. It will be difficult, but insisting on issue-based engagement with other parties will allow the opposition to claim victories and change the basis on which MPs negotiate and make concessions. What’s more, issue based work keeps the opposition at arm’s length from all sides of the political debate.

Indeed, opposition MPs cannot be seen as leaning to one side more than another. Falling into the dichotomous trap of debating whether sovereignty or reform are needed first, as Lebanon’s political actors do. Instead, the opposition must place themselves at an equal distance from both traditional camps. As a start, opposition to Hezbollah’s arms needs to be counterbalanced with opposition to the banking sector’s agenda and obstruction of a just end to the financial crisis—failure to send the right signals on either issue risks the opposition being tarred with the wrong brush every time.

A national unity government only spells disaster when it comes to implementing much-needed reforms. As seen in the past, traditional parties rarely do well in sharing power. Opposition MPs should not endorse a party-cartel government, nor boycott its formation outright. Yet as a nascent minority bloc, which will be reviled by traditional political forces, entering into a national unity government will mean the block will always be a weak player. However, the opposition would do well to be seen to enter into the horse-trading once that process starts—but not as it drags on. The opposition can balance out the need to engage with the desire to not be a minority partner in government by insisting on conditions to enter the government at the outright.

First, in proportion with their size in Parliament, any inclusion in government will require that two to three ministries should go to opposition MPs. And given their commitment to addressing the banking and economic crisis, the Ministry of Finance needs to be one of them. Second, the opposition should insist its inclusion is based on no 1/3 veto for any political bloc in the cabinet. Most likely these conditions will be unacceptable to the status quo of the traditional class, allowing the opposition to get out of the bazaar of cabinet formation and enter into substantive opposition.

As a minority opposition, the 13 MPs needs allies. With many MPs coming from a  civil society background, those links are already in place and need to be bolstered alongside existing rapport with think tanks and independent media outlets.

But more work needs to be done to work with collective action groups which can form a strategic and populous ringfence of support for the opposition at key moments during the political dogfight to come. Specifically, deeper ties are needed with syndicates and labour unions in order to wrestle them away from co-option by the traditional political class. In that vein, civil service protest groups are a key entry point which can be capitalised on going forward.

The first 100-day plan offers a structured approach to guide MPs entering Parliament during their first critical months in office. Of course, there is much to do to help cement the opposition’s legitimacy and viability in the minds of voters. There needs to be a combination of quick wins and foundational work for the period after the first 100 days. Ideally, focus should be placed on three targets:

Target 1: Getting into Nejmeh Square

Removing the barriers that are currently blocking the way to Parliament is a good first step, but these are just physical barriers. Barricades to Parliament existed long before the erection of the concrete walls in 2019. Currently, Parliamentary committees lack transparency and work in secrecy. Lebanon’s Parliament needs serious procedural reforms that would allow for public scrutiny and accountability. Furthermore, committees rarely call on the support of experts. By opening committee sessions to public scrutiny, citizens can then participate in the democratic process, and hold their representatives accountable.

Parliamentary committees play a significant role in the work of Lebanon’s governance. Committees are responsible for ensuring effective review of legislation and monitor the government’s performance. By joining key committees, opposition MP’s can insure transparency and effective review of legislation. However, opposition MPs should not only act as a watchdog but take up key roles as heads or secretaries of these committees.

Committees critical to the socio-economic reform of the country include: Finance and Budget Committee, Administration and Justice Committee, Public Works and Energy Committee, and Defence and Interior Committee.

Several draft bills are waiting to be reviewed and debated by Parliamentary committees, particularly with regard to the financial crisis and the IMF deal. Since the Mikati cabinet has taken office, several draft bills have been sent to Parliament, with little to no action taken.

The opposition’s issue-based work should first and foremost address the financial crisis and focus on the following priority legislation: lifting banking secrecy, the capital controls law, the 2022 budget, an emergency law on bank restructuring, tax code reform, regulation of state assets, and amendments to the code of money and credit.

Following the first critical few months, opposition MPs can then turn their attention to addressing the three decades of backlogged political activity, and finally towards the future. With 10 MP signatures, opposition representatives can introduce laws to the floor of Parliament to change the constitution, sending a clear message to their base, and to their colleagues of their intent to reset the agenda.

Many key reforms require constitutional change, which requires a two-thirds vote in Parliament to amend the constitution; an unlikely situation given that traditional parties still control the majority of Parliament. Nonetheless, in forcing the establishment’s hand to reject these laws, their introduction will serve as a reminder to the public that they continue to give lip service to the ideas of reform, but in practice protect the ruling elite’s narrow sectarian interests.

The following list is by no means exhaustive, but speaks to many issues that have resurfaced in recent years in the public discourse, civil society groups, and in international relations.

Opposition MPs will undoubtedly face a fierce backlash from the traditional political class. However, the May 15 elections showed that the country’s kleptocracy does not hold a monopoly over political representation. The election of opposition figures long seemed impossible, but now Lebanese citizens know that that every vote counts and got a taste of an alternative. And while it may be difficult to accomplish drastic reforms in this parliamentary term, the opposition needs to stick to the guiding principles that got them elected. If they do, with time the movement can only grow. 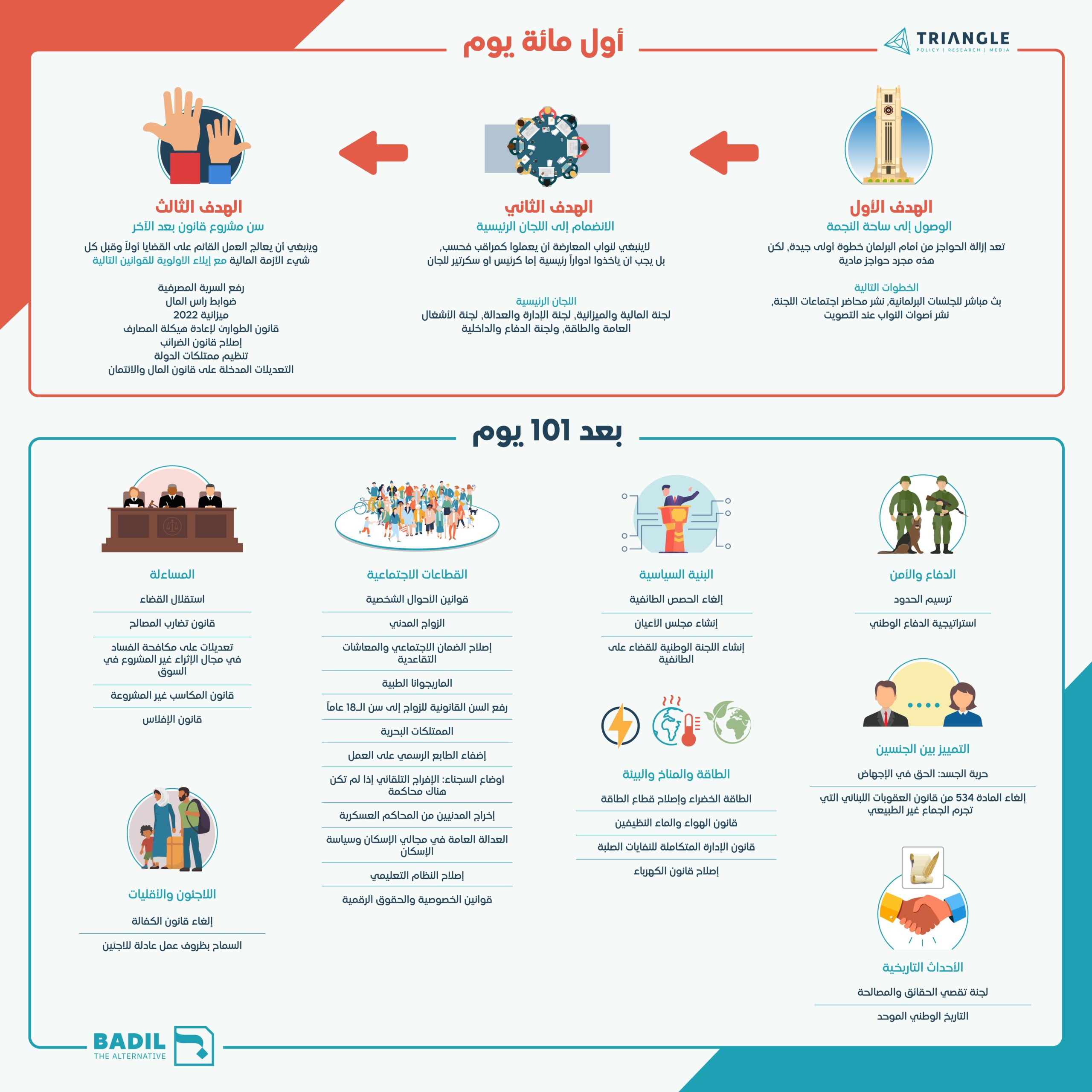