Path Dependence: Why Voters Turn to Traditional Parties Over Independents in Lebanon’s Election

Two and a half years, three prime ministers, an exploded capital, and billions still stuck in the banks have done little to lift the grapple hold of the 30-year political hegemony of Lebanon’s ruling elite. With parliamentary elections slated for May 15, the Lebanese will have their first chance at democratic change in the country since the October 2019 uprising and financial crisis. Yet whether they choose the old guard or the new blood will come down to their intentions on the day, the topic of a new poll of over 4600 eligible voters conducted by Oxfam.

To start, voter apathy looks to be widespread with just 54% of those polled saying they would vote in the parliamentary elections. While actual turnout at polls may well differ, the figure gives a good indication that the historical trend of half the electorate turning out on voting day may persist. The past few months seem to have been pivotal in enhanced support for independent candidates: compared to previous polling by the Konrad Adenauer Foundation in December 2021, the number of respondents intending to vote independent has almost doubled.[1] And among those who now say they will vote in the next election, 48% said they would vote for independent candidates, defined in this study as candidates which had not previously entered parliament. [2]

That may sound like a boon for an opposition with one semi-independent candidate in office. But the number significantly changes when accounting for urbanisation. In more urban areas such as Beirut, 66% registered to vote there say they will vote for independent candidates, relative to 51% Aley-Shouf and just under 20% in Tyre-Zahrani.[3] These results indicate that, as expected, these districts are the most likely to see independents win seats while traditional parties in the south wipe out the opposition.

The proportional representation (PR) voting system, introduced in 2017, replaced a majoritarian winner takes all system. PR allows for seats to be allocated based on share of votes and, in theory, should benefit minority candidates and encourage voter turnout. However, in practice the PR system introduced several caveats that undermine its progressive veneer. Christophe Kairouz, a senior research assistant at Lebanese Association for Democratic Elections (LADE) outlined two main factors in the electoral system that disadvantages independent candidates: 1) A high electoral threshold and 2) Gerrymandering and Sectarian Distribution. For a PR system to work, a low electoral threshold is needed (under 5%). In Lebanon, the electoral threshold is extremely high and ranges from “7.7% up to 20%”. For example, Tyre-Zahrani has an electoral threshold at 14% whereas Aley-Chouf candidates are only required 7.7% of votes to gain a parliamentary seat. A high electoral threshold makes it more difficult for independent candidates to gain a seat, unlike traditional candidates who have larger resources, alliances, and mechanisms of support. Gerrymandering and sectarian quotas also greatly contribute to entrenching traditional parties. The voting districts have been gerrymandered “to maximize the benefits of forthcoming electoral alliances.”[4] The law has manipulated the boundaries to where there is clear confessional majority effectively reducing the religious and ideological diversity of a district to a point where minority or opposition votes are negligible.

The rural-urban divide is also likely explained by recent history. In 2018, only 35% of Beirut’s eligible voters turned out on the day. Since then Aug. 4th Blast, concentration of protests, months of sit ins and civic discussions in the capital likely account for a doubling of the expected turnout. At the same time, in the south, traditional parties such as Hezbollah and Amal have long provided social services such as education, healthcare, and microfinance for their members while the state has long been absent. Finally, the polling in Aley-Shouf supports the argument that voters participate more when the margin of votes between competing parties is small when compared to Tyre-Zahrani.[5]

Interestingly, those above the age of 60 expressed the highest desire to vote independent at 58%, while the lowest age bracket (21-30 years) had the second highest intention to vote independent at 52%. The findings indicate that senior citizens may have reached the point where they no longer support their traditional parties. Given senior’s influential roles in household decision making and ‘trickle down’ family voting, opposition candidates would do well to target campaigns at this cohort. 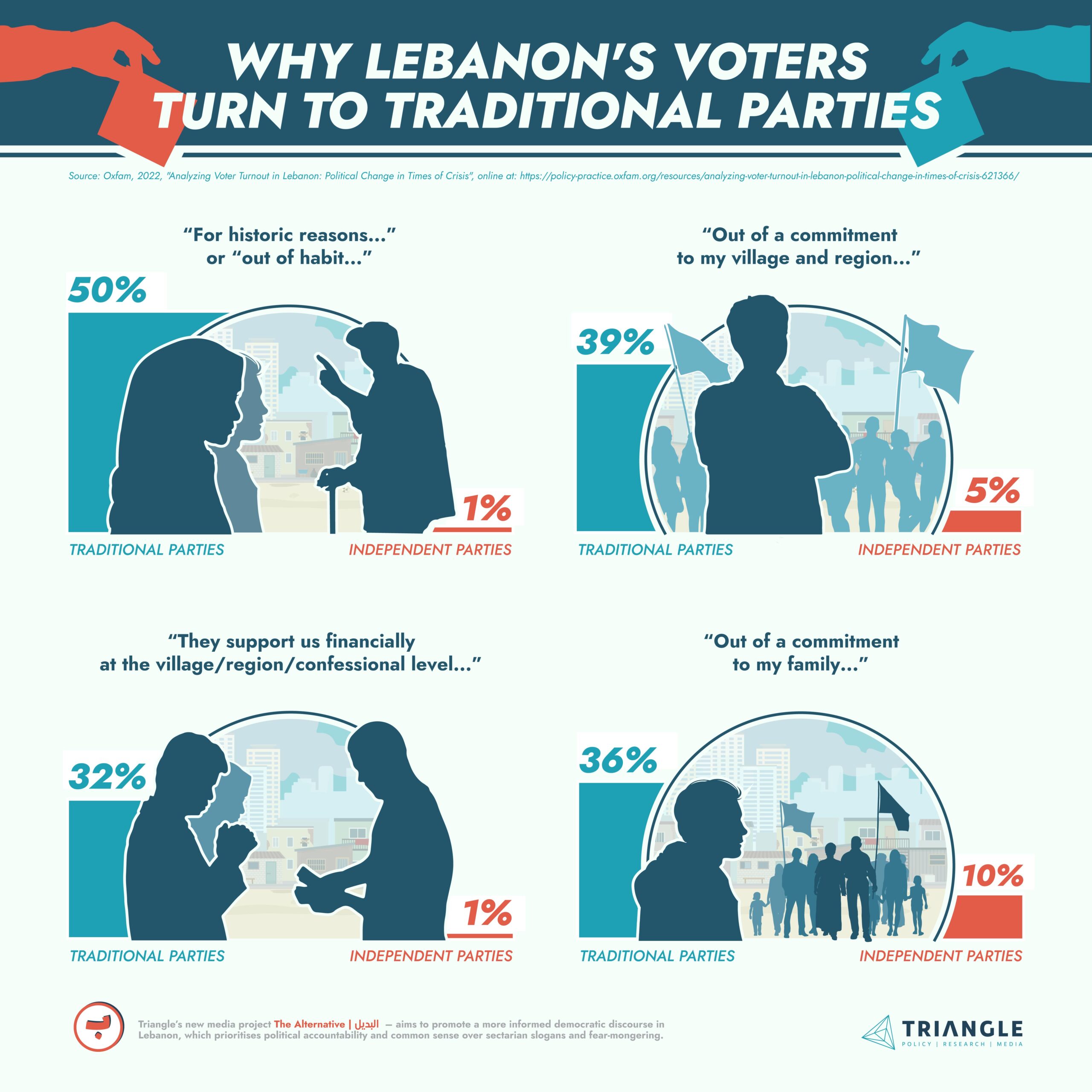 While the findings of the study do give some hope for the opposition in more well-off urban areas, or those with smaller number of overall voters, they also indicate that sect and family remain the stronghold of traditional parties’ appeal to their voter base. In fact, 50% of those voting for traditional parties stated ‘historical reasons,’ for their choice compared to less than 1% among independent candidates. This trend continues with questions on commitment to village, family, and region all polling heavily in favor of traditional candidates relative to independents (see infographic). This indicates that factors which contribute to fear of others and sectarian-based voting continue to dominate the logic of voters who support traditional parties, even if they don’t think too highly of those they vote for: A whopping 98% of respondents thought that the ruling elite’s performance was bad (79%) or average (19%); yet 40% of those who answered “bad” were still planning on voting for traditional parties. Over 50% of respondents will refrain from voting due to lack of promising candidates

What’s also clear from the findings of the poll is the financial power and patronage of traditional parties relative to independents still holds sway over voters. Oxfam found that 53% of respondents who will vote for traditional parties and 41% of those who will vote for independent parties reported knowing of vote-buying in their neighborhoods. Vote-buying translates in many different ways such as providing transportation to polling stations, provision of electricity bought on the black market, and of course the most direct exchange of cash for votes. Vulnerable groups have long been the target of vote-buying and clientelism in Lebanon, however with the deteriorating economic situation it has only become cheaper and easier for traditional parties to purchase political power. With over 80% of the population living in multidimensional poverty, the vast majority of voters can now be considered vulnerable. [6]

Yet political patronage goes beyond vote-buying, and has been known to hold a monopoly over public sector services and jobs. With political and economic deterioration of the country also meaning less public services being offered by the state, citizens’ reliance on the clientelist networks of their political leaders only seems to have deepened. According to Oxfam’s study, 32% of those who intend to vote for traditional political parties will do so because those parties support them financially at the village, region, or confessional level, compared to just 0.8% for independents.

Less access to services is also connected with support towards traditional parties (and their patronage systems), particularly with regard to education. Indeed, as formal education increases, so does the likelihood that respondents will vote for independent candidates, ranging from 44% at the lowest education bracket increasing linearly to 56% for those with graduate degrees. Respondents as a whole, however, still expressed more trust in independent candidates in their ability to improve the economic crisis (63%), living conditions (62%), and governance without corruption (55%), compared to 40%, 43%, and 40% respectively with traditional candidates. On the whole there is more nominal faith in independents to govern more effectively.

The past two and a half years have left Lebanese in a liminal space awaiting political and economic reform. With long awaited elections finally upon voters, making a choice will not be easy. In a system where the majority no longer trusts the democratic process, or the implementation of law, it is difficult for many voters to see the elections as an effective tool of political change.

The demoralization campaign of the ruling elite coupled with a confounded electoral law which favors them in most districts as has left many voters believing there is no alternative. Thus not voting, or voting for along confessional lines still looks to be an act of self-preservation for many, something which understandably trumps having specific policy agendas to guide their vote.

That said, legislative elections are fueling the hope for change, and independent candidates have gained ground especially in Beirut and Aley-Shouf electoral districts. Citizens may not see the change they wish on the night of the elections, but it must be recognized that the political consciousness of the Lebanese has already changed for the better. No matter what the result, these elections will be an important moment of learning for democracy in the country.

[1] L’Orient Today, 2022, “A quarter of Lebanese would consider voting for an independent figure in May’s legislative elections”, online at: https://today.lorientlejour.com/article/1290925/a-quarter-of-lebanese-would-consider-voting-for-an-independent-figure-in-mays-legislative-elections.html

[3] The North of Lebanon was not included in the polling. 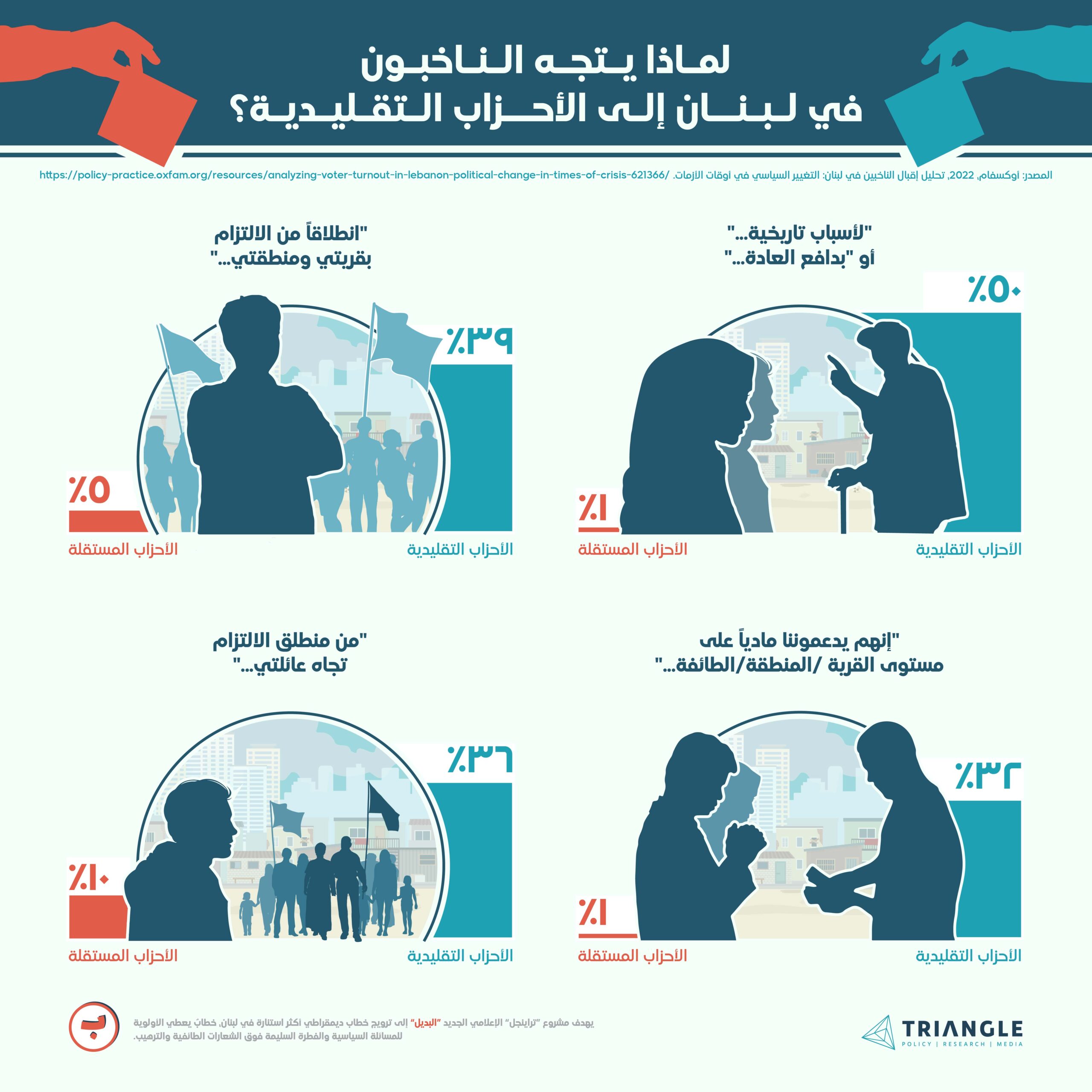