Morally Bankrupt: The Legal Solution to the Banking Crisis No One Is Talking AboutBy Connor Kanso

On June 22, the Association of Banks in Lebanon (ABL) sent a letter to the International Monetary Fund (IMF), calling Lebanon’s draft agreement with the IMF “unlawful” and “unconstitutional.” An interesting choice of words as the ABL, in dealing with the banking crisis, has had little concern for the law.

The IMF has pledged US$ 3 billion to help Lebanon recover from the financial crisis on condition of a banking restructuring plan that “addresses the large losses in the sector while protecting small depositors and limiting recourse to public resources.”[i]

The ABL has repeatedly argued for a bail-out, whereby the government would finance the banks’ losses by selling state assets and the country’s gold reserves, as well as using potential future hydrocarbon revenues.

Meanwhile, written in black and white in the Official Gazette exists Law No. 2/67. Also known as the “Intra Law,” it governs insolvency proceedings of Lebanese commercial banks.

“Commercial banks’ board of directors, auditors, and authorized signatories can be held personally liable for the banks’ losses according to the Lebanese Code of Commerce and Law No. 2/67,” said Elie Hachach, Professor of Banking and Insurance Law at Saint Joseph University and a board member on the Committee for the Protection of Depositors’ Rights. 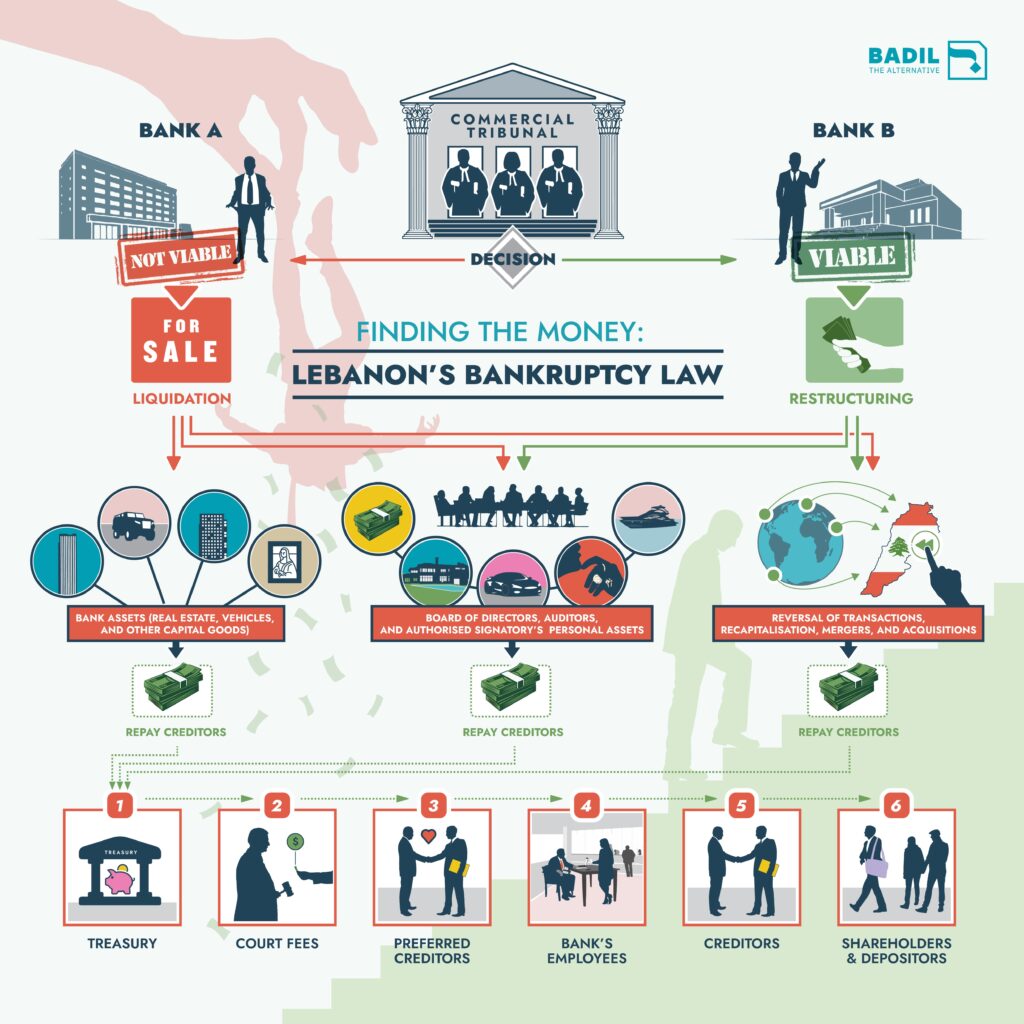 Following the 1966 collapse of the infamous Intra Bank, Lebanon introduced Law 2/67 to restore confidence in the banking sector. The law clearly states that when a bank defaults, it must enter an insolvency procedure.

To support a lawsuit the default bank must first be declared insolvent in court. Four groups can seek insolvency in court: the Lebanese Central Bank (BDL), commercial banks, creditors, and the public prosecutor.

“The [BDL, commercial banks and public prosecutor] have not presented this case because they are seeking to protect their interests, not the interest of the general public,” said Hachach.

“On November 1, 2019, a large number of Lebanese banks de facto defaulted and ceased paying their dues,” wrote lawyer Karim Daher in L’Orient Today.[ii] Yet so far only creditors have come forward to press for initiation of insolvency proceedings.

If the court initiates insolvency proceedings, the bank’s board of directors is removed, their assets frozen for 12 months, while banking secrecy is lifted for them, their spouses, and their children.

The court will then appoint a temporary manager and committee to review the bank’s losses and make a recommendation whether the bank must be restructured or enter liquidation.

The committee must have a majority of members representing creditors, shareholders, and depositors, while the remainder will include court appointed experts and government officials. Within six months the committee must review the bank’s assets and liabilities and make an assessment. If it fails to do so, a second committee headed by the BDL governor is to make the final recommendation to the court.

“The fact that the BDL governor can have a say is a big question mark,” said lawyer Zeina Jaber, co-founder of the Depositors Union. Current BDL Governor Riad Salameh faces multiple corruption and embezzlement charges in several countries and is widely considered the architect of Lebanon’s financial collapse.

According to Hachach, seeking a declaration of insolvency should be done for the simple reason that if the court declares the bank insolvent you have a period of 18 months prior to default in which all purchases, sales, trades, and transfers can be reversed.

Who will foot the bill?

Once the committee delivers its findings, the court may decide upon the liquidation or restructuring of the bank. “[In either scenario] the board of directors can be sued civilly or criminally depending on what mistakes they have made,” said Hachach.

No crime is needed to hold the board of directors liable, as is the case with fraudulent bankruptcy. “The burden of proof to find the upper management civilly liable is to show that they made mistakes in managing the bank,” said Jaber.

Lebanon’s Code of Commerce does little to protect bankrupt business owners, which in the long term discourages investment in the economy. But in the case of insolvent banks, it could help launch civil and criminal lawsuits against bank directors.

“Usually, the bank’s chairman and auditor will be considered criminally liable for the simple reason that they are the first people to know what the bank is doing,” said Hachach.

Chink in the Armor

The good news is that Law 2/67 highlights a path out of the financial storm. The bad news is that creditors need an impartial and efficient judiciary to guide them. Something for which the Lebanese judiciary is not quite known.

The judicial system’s inadequacies are in plain sight. For example, regarding Riad Salameh’s illicit enrichment, a slew of judges has been either unwilling or unable to take on the case.

“ABL and BDL are prohibiting banks from initiating these proceedings for the simple reason that once a bank in Lebanon is declared insolvent, all other banks will follow,” said Hachach.

“A criminal complaint was filed with the supreme public prosecutor in Beirut [Ghassan Oweidat], but for political reasons he did not follow up on the file,” said Jaber. “Basically, they are keeping the file in a drawer.”

Despite the cloud of doubt hanging over the judiciary, Law 2/67 could still protect depositors against the depredations of the politico-banking elite. If only prosecutors like Oweidat would do their job, the law outlines an orderly default or restructuring plan to repay creditors and depositors, in stark contrast to today’s chaos.

[1] An authorized signatory is the person who’s been given the right to sign documents on behalf of the company; usually the chairperson of the board of directors. 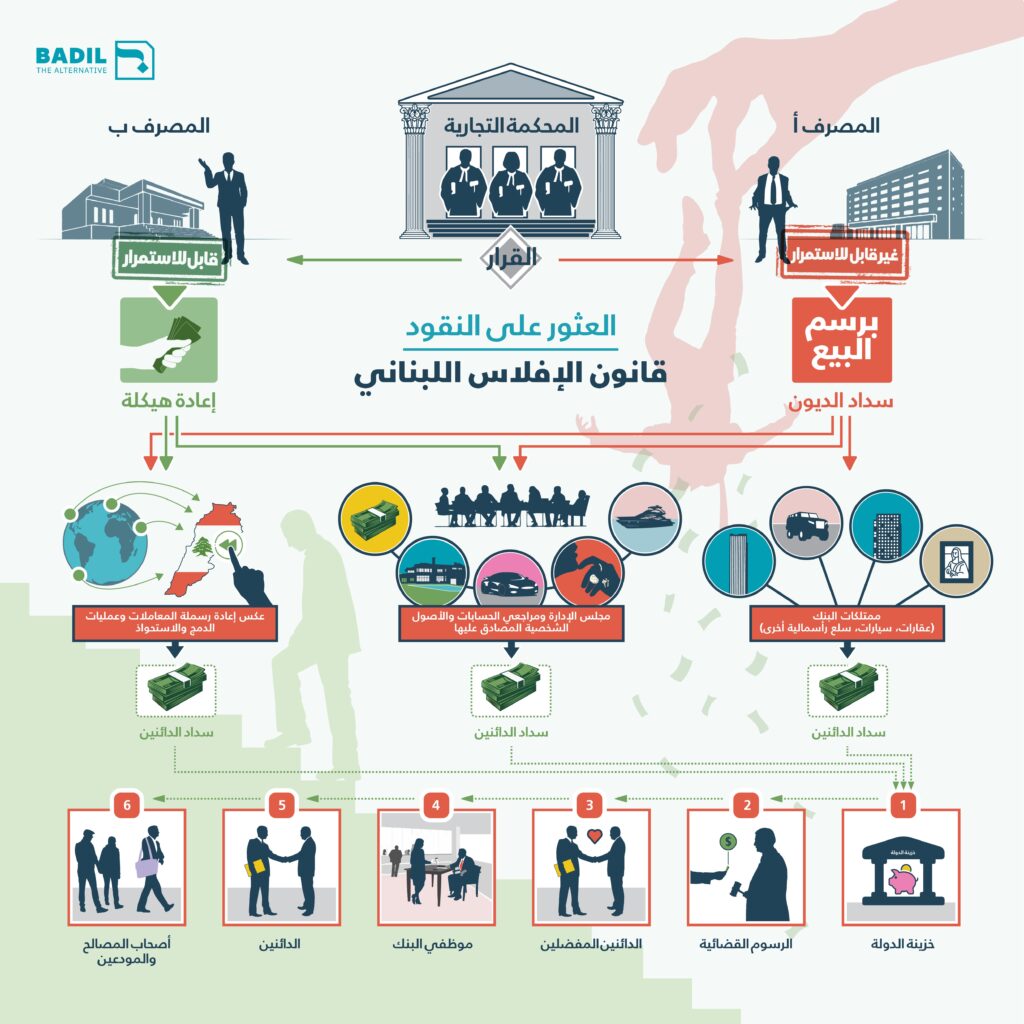