After at least 15 years of procrastination, Lebanon’s first-ever comprehensive competition legislation was finally signed into law by President Michel Aoun last week. The law, which civil society groups and the international community have demanded for decades, purports to liberate Lebanon’s private sector from control by politically connected cartels.

Ideally, a strong competition law and regulatory authority would ensure that new companies do not face unfair barriers to entering Lebanese markets. Unreasonable barriers include collusion amongst cartels to fix market prices, dominate access to government permits, and manipulate supply and demand. An ideal commercial environment allows businesses to compete to deliver products that are cheaper and higher quality – lest they lose customers to a rival company.

This scenario has not existed in Lebanon for many years. In 2003, the country’s latest comprehensive market competition study found that half of Lebanon’s domestic markets are either monopolistic (dominated by one company) or oligopolistic (dominated by several companies). Free from proper competition regulation, these commercial groups have worked together to maintain high prices for products as disparate as fuel, cement, and potatoes.

Aware of these realities, parliamentarians hailed the competition law’s enactment as a new chapter for Lebanon. Yet these public comments are mainly intended for foreign rather than Lebanese ears, according to Myriam Mehanna, a lawyer and senior researcher at Universite Saint-Joseph de Beyrouth.

“There has been pressure on the Lebanese authorities to pass the competition law since the 2000s,” she explained. “It is a major condition of the International Monetary Fund and major nations […] to show that (Lebanon) is serious about reform.”

Unfortunately, Mehanna holds out little hope for improved market competition under the new legislation. “If anyone manages to get even one indictment (for anti-competitive practices), it will be heroic,” she predicted.

A (kind of) independent regulator

Mehanna highlights the membership requirements for the Competition Board, which leads the National Competition Authority’s operations. The competition law reserves places for judges, lawyers, and even members of the Chambers of Commerce, Industry, and Agriculture – but not for Lebanon’s long-suffering consumers.

“There is no seat for a consumer rights expert, but [the competition law] gives seats to the Chambers,” Mehanna stressed. “And we know whose interests they have defended over the past 30 years.”

Instead, appointments to the authority will have to be suggested by the competent minister—that is the justice minister for judges and the economy and trade minister for chambers. Then the cabinet, with all its infighting, will appoint the members of the authority. And there’s a catch: appointments need to come from either the director general level of the competent ministry or one occupational grade lower—positions that are customarily the result of sectarian horse trading between traditional powers in Lebanon. To boot, the authority itself will not be able to get off the ground until it is fully funded through a specific allocation in the national budget (which has yet to be passed), or foreign funding for its activities. Only then, can the authority start its work as the ‘independent’ regulator of competition in the country.

Fellow lawyer Zeina Jaber highlights the National Competition Authority’s institutional status as a glaring opening for political steering. Article 24 places the regulator under the ‘tutelage’ of the Ministry of Economy & Trade, to which it must report to. That said, while the authority must report to the ministry, in theory at least, the ministry cannot veto its decisions.

“It looks independent, but technically it is not,” argued Jaber. “We already have a lot of examples of bodies being led under the tutelage of ministries.”

The new legislation does create basic offences for anti-competitive practices and agreements, which involve companies abusing a dominant position in the relevant sector, price fixing, stockpiling, collusion on government bids, obstructing products from entering the market, and exchange of sensitive information. Yet the market’s current structure suggests that the National Competition Authority will need dogged determination to make true inroads into Lebanon’s cartel-ridden economy.

Under the new legislation, Lebanon’s three cement cartel members clearly control over 40% of the market – an illegal “dominant position,” as per the law. Yet forcing the companies to comply with the competition law will be another matter entirely, given the cement cartel’s deep ties to Lebanese politicians. 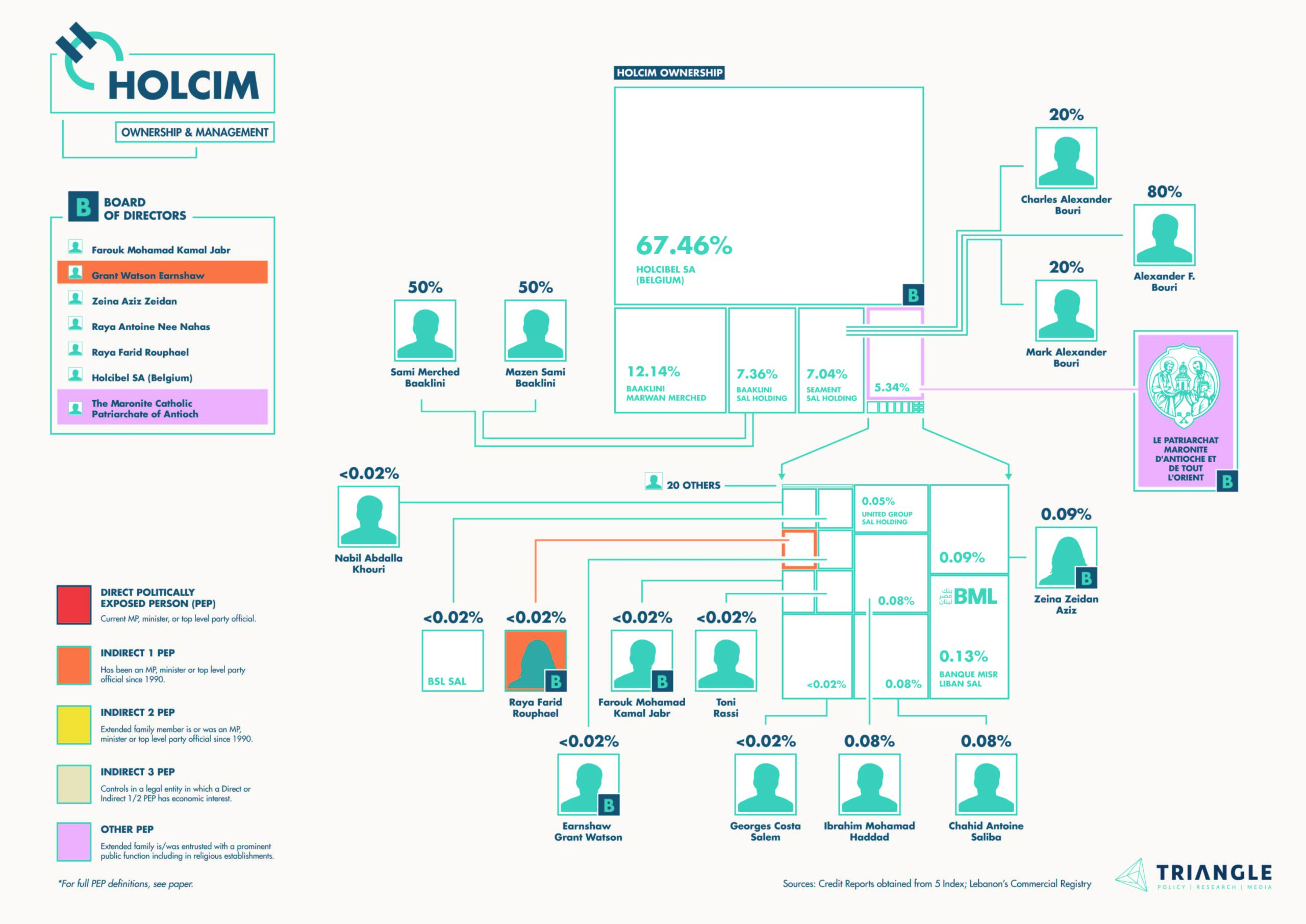 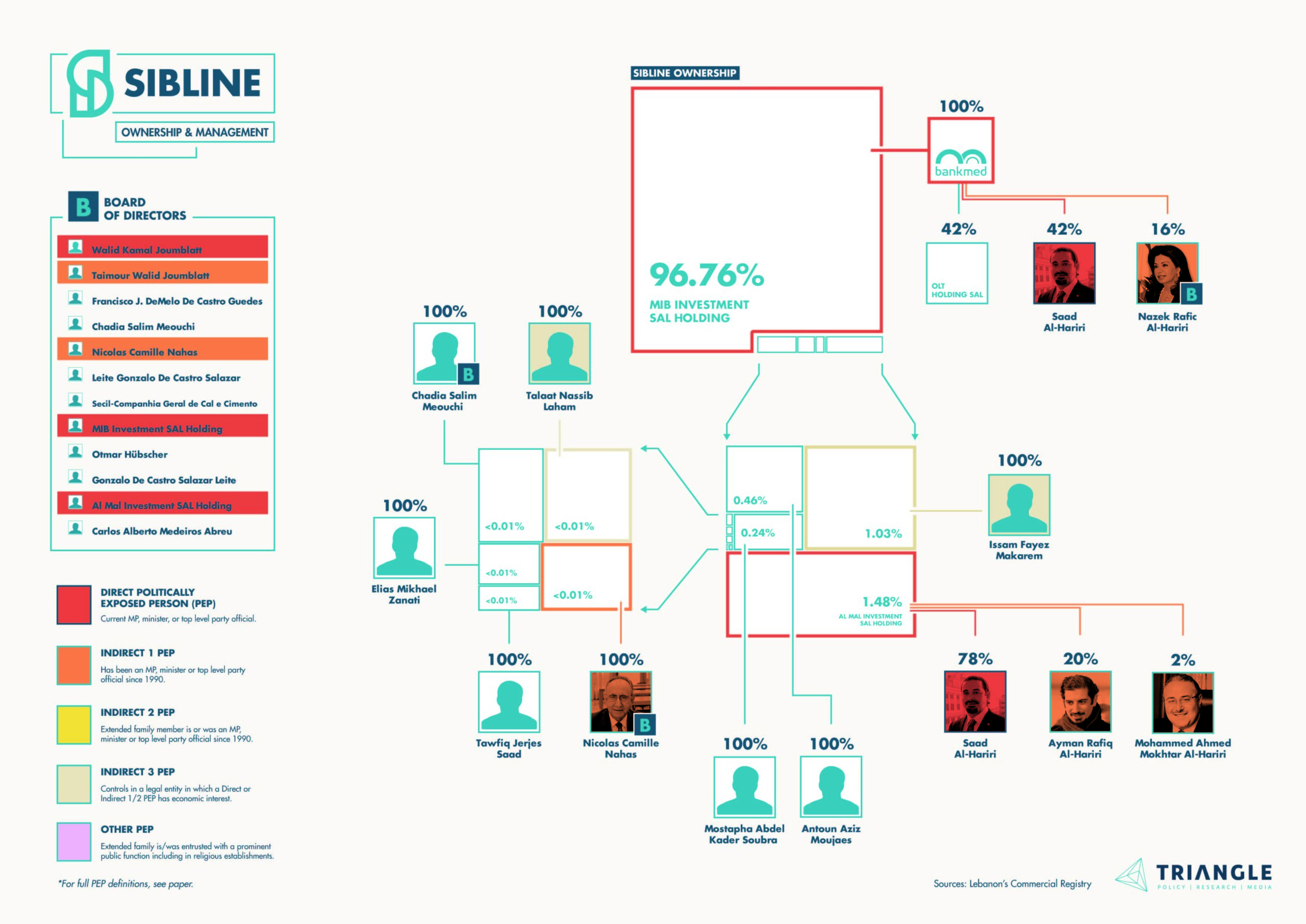 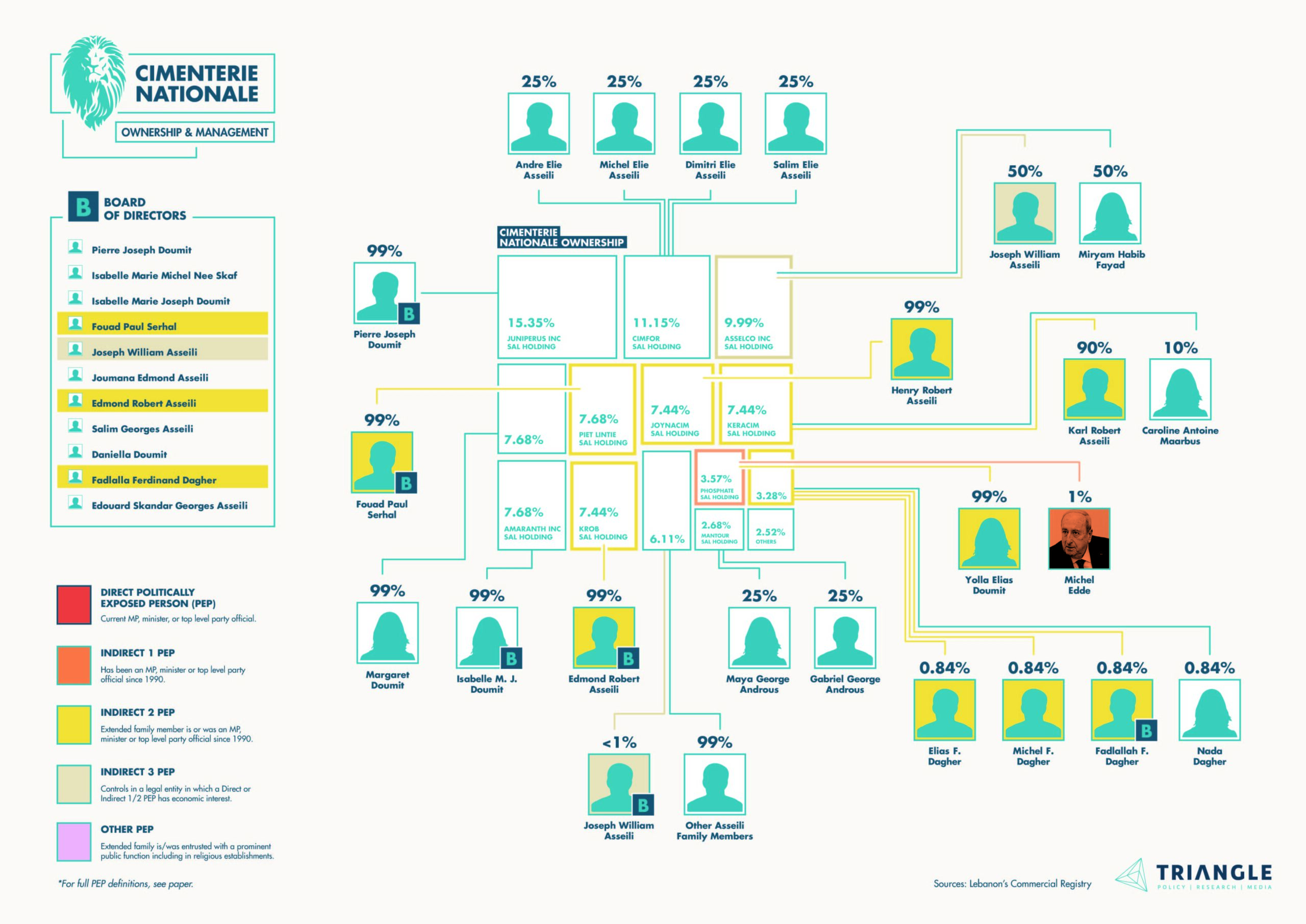 In other industries, privileged companies dominate markets while maintaining an artifice of fair competition. Lebanon’s oil import industry is controlled by 13 separate businesses – a seemingly healthy number – which frequently work together to preside over the country’s entire supply chain for oil derivatives. 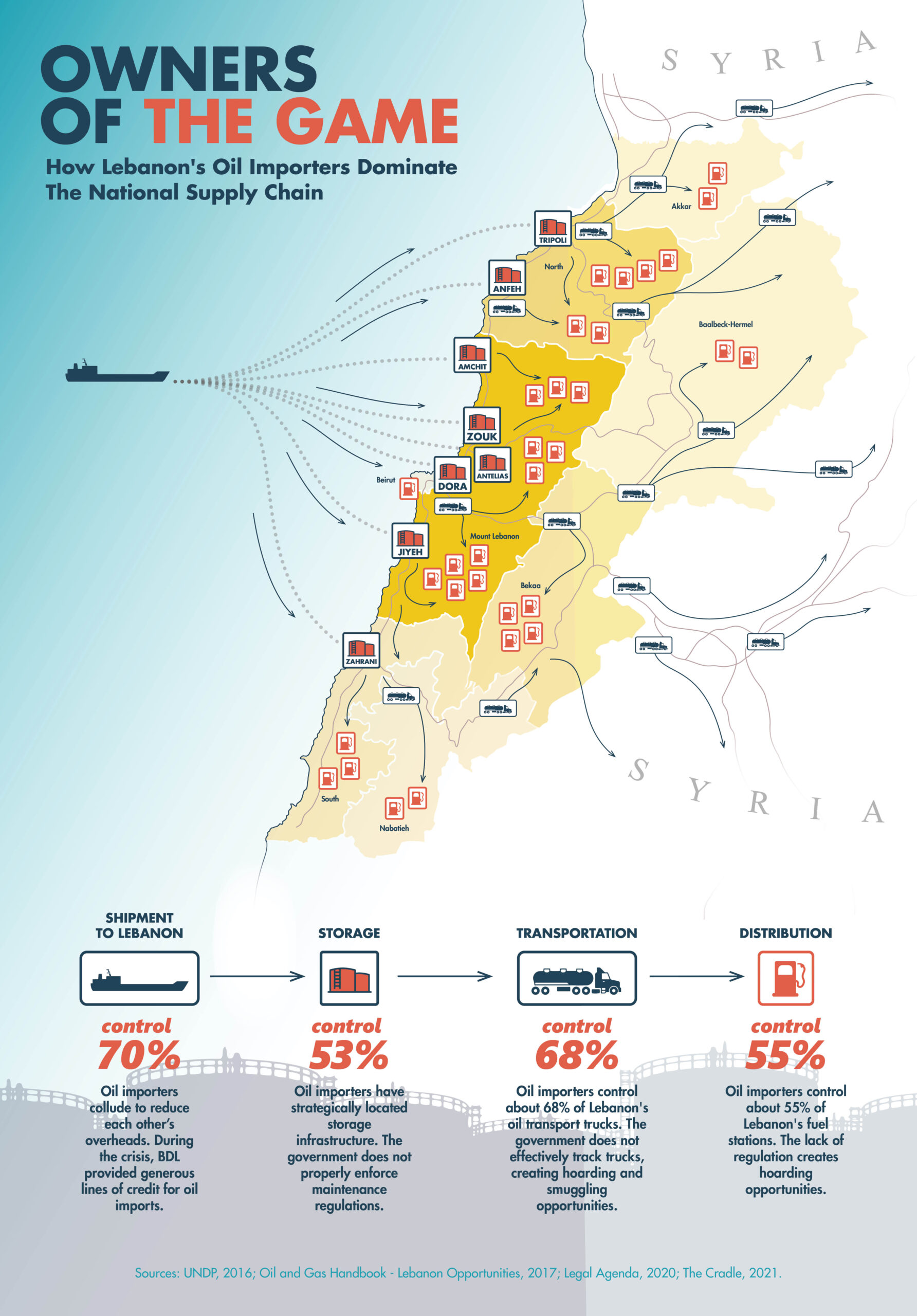 In the past year, the Lebanese public has struggled with the country’s opaque oil import sector, with persistent reports of fuel hoarding amidst successive oil crises. It does not help that politically exposed persons have established and reported ties to oil importers, including Druze community leaders Walid and Taymour Jumblatt, as well as former government ministers (see infographic). 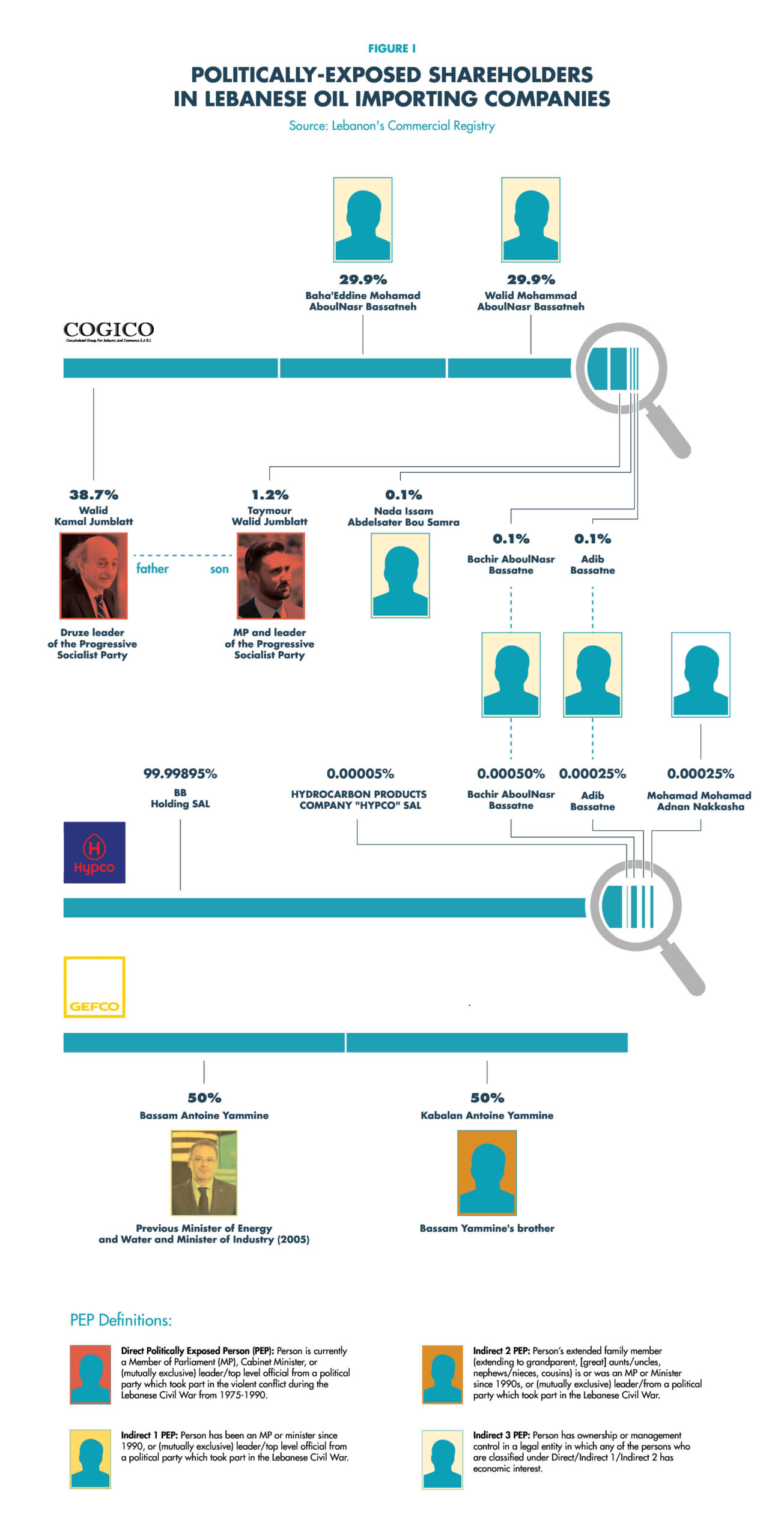 With such entrenched commercial interests, the National Competition Authority’s lack of true institutional independence is of critical importance. Mehanna also warns that the regulator does not enjoy tough penalties to impose on anti-competitive behaviour, including not being authorised to sanction individuals. “[Under the competition law] it is hard to establish that behaviour is illegal and, even if you get there, the penalties do not dissuade [violations],” she concluded.

Indeed, the new law does outline a framework for how penalties should be accounted for, but does not get into specifics. In several instances, penalties for individuals or entities – for instance, the maximum penalty imposed of a violator is set at 100% of the total revenue of the product or products concerned with the violations and capped at 10% of the total volume of their business relative to the previous fiscal year.

All that said, the new competition law does represent some progress. Most prominently, Article 5 removes the concept of exclusive agency agreements, which have bedevilled market competition in Lebanon since their introduction in 1967. Under these arrangements, Lebanese law had guaranteed the rights of select individuals and companies to sell specified products from abroad – to the exclusion of all competitors.

“(Article 5) is an important step, and one of the only good steps in the law” Muhanna explained. “It has been one of the major tools used to defend monopolies.”

Lebanese agents can still operate as sole product distributors – after all, foreign suppliers can limit the number of parties authorised to sell their products – but exclusive agents will no longer receive the same generous legal protections as before.

Nevertheless, the exclusive agency provisions illustrate the fraught process of implementing reform. In 2019, Parliament began reconsidering the draft competition law, which had first been tabled 12 years earlier. Since then, Parliamentarians have haggled over Article 5’s terms in an obscure legislative debate that Lebanese NGO Legal Agenda has dismissed as “a storm in a teacup.” This further delay has now been broken only by Lebanese lawmakers’ pressing need to appease the international community: The IMF has demanded the competition law’s enactment as a precondition for a financial rescue package.

It would be premature to treat the new competition law as a true watershed moment. As the parliament finally introduced this legislation, it refused to pass a new judicial independence law – another key demand from potential foreign donors.

Indeed, Berro fears that Lebanon’s elites have succeeded in filling criteria sheets for international policymakers, without truly risking their pervasive business interests. The international community “has said bravo while remaining silent on corruption in the country,” he said.

For her part, Mehanna does not believe Lebanon has advanced too much further than the preceding 15 years, during which the draft competition law languished in a desk drawer within the Grand Serail and the halls of Parliament. “The law [has been] sabotaged completely,” she said.